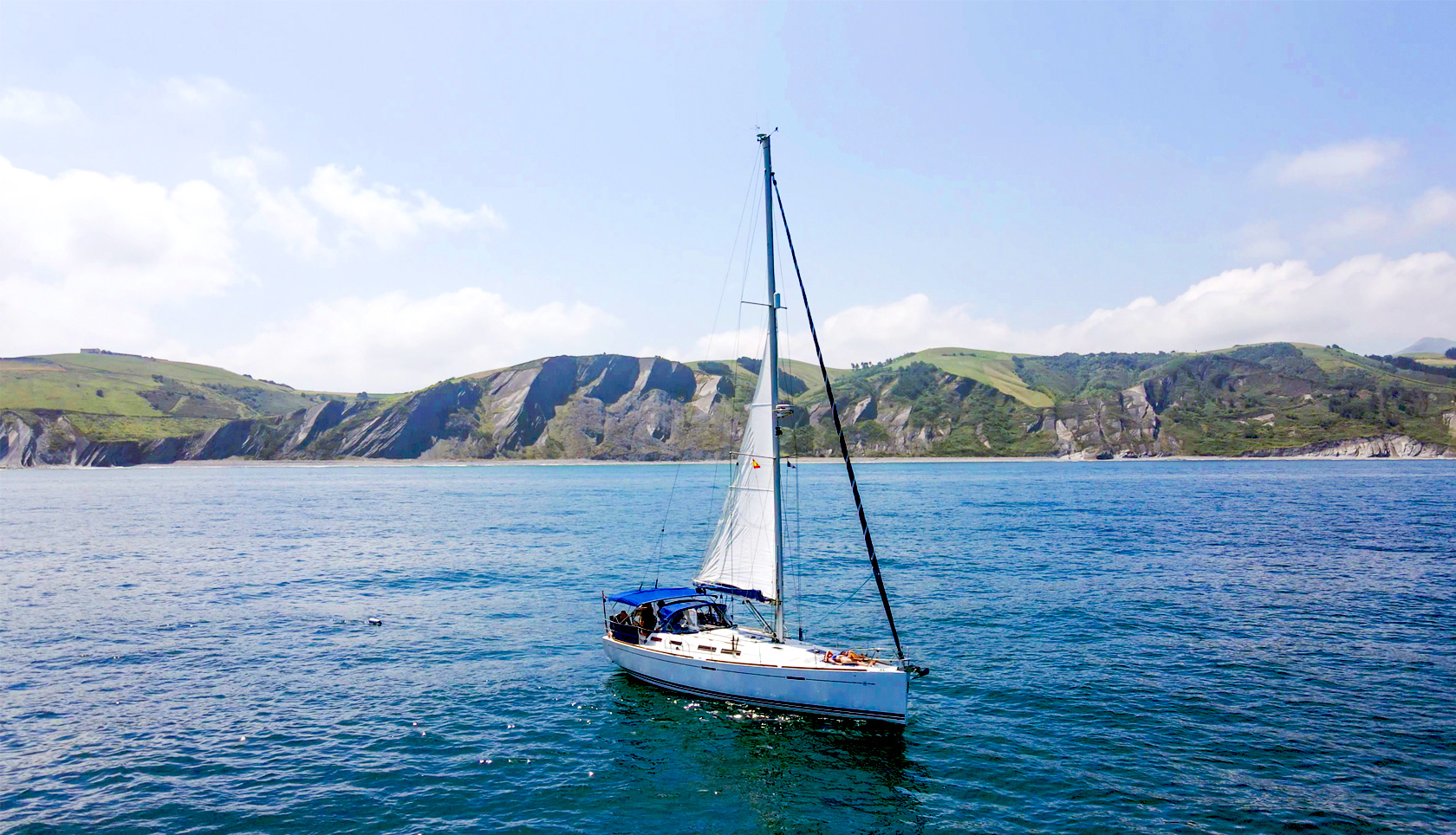 Villages on the Basque Coast to visit by sailboat

There is no doubt that the Basque Coast is home to some of the most beautiful places in the whole of the Bay of Biscay. A Coast located at the foot of the Pyrenees with cliffs that plunge into the sea, dotted with coves and beautiful pebble and sandy beaches that are home to an exotic vegetation and pass through villages that make you fall in love with their charm.

Today, we would like to share with you, from our point of view, the places on the Basque Coast that you must visit from the sea at least once in your life.

Our top 3 coastal towns to visit by sailboat:

Visiting the Bay of Txingudi by sailboat

Located between Hondarribia and Hendaye, formerly known as Oiasso, it is one of the bays with the longest history thanks to its strategic position and proximity to France, specifically to the French Basque Country. The discovery of a sunken ship, the first Roman shipwreck in the history of the Basque Country, was noted here.

There are many stories about this peculiar bay, but at first glance, what stands out is its characteristic contrast between sea, mountains, beaches, cliffs, sandbanks, and vegetation.

To the west, Hondarribia, located at the foot of Mount Jaizkibel, the first Pyrenean mountain where the GR11, the 800 km trail that crosses the Pyrenees from Cape Higuer to Cape Creus, begins. 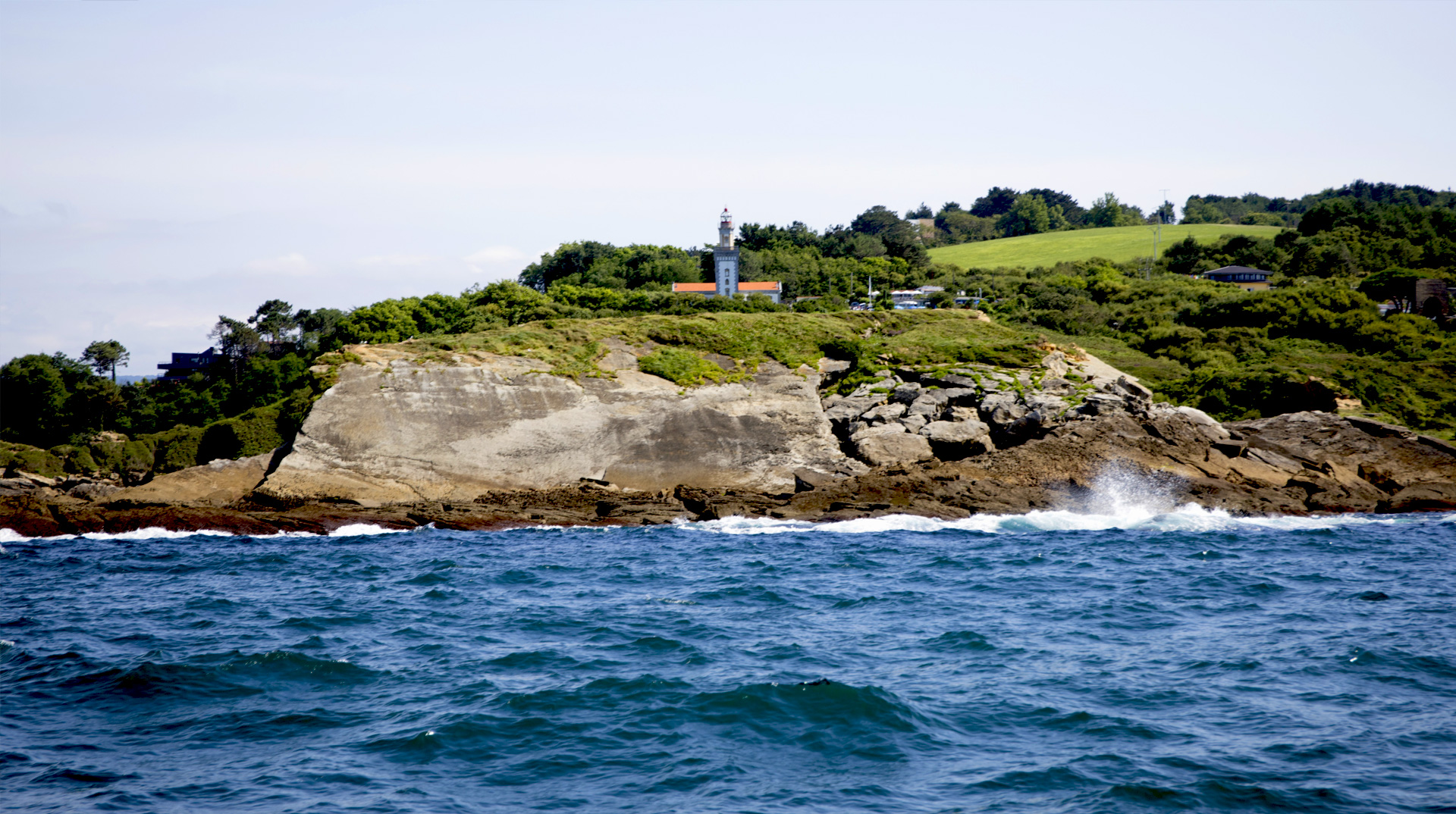 To the east, Hendaye (France), with a beach that stretches up to 3 km at low tide. Adjacent is the Abbey Castle (Château d’Abbadie) and the cliffs of La Corniche that connect Hendaye with Saint-Jean-de-Luz.

To the south, 300 million years old, the oldest mountain in the Basque Country: “Peñas de Aia”. And finally, to the north, the immensity of the Cantabrian Sea united with the Atlantic Ocean.

A privileged place with incredible stories that we discovered during the crossings. An obligatory stop if you want to get to know the Basque Country from a different perspective.

The bay of Pasajes 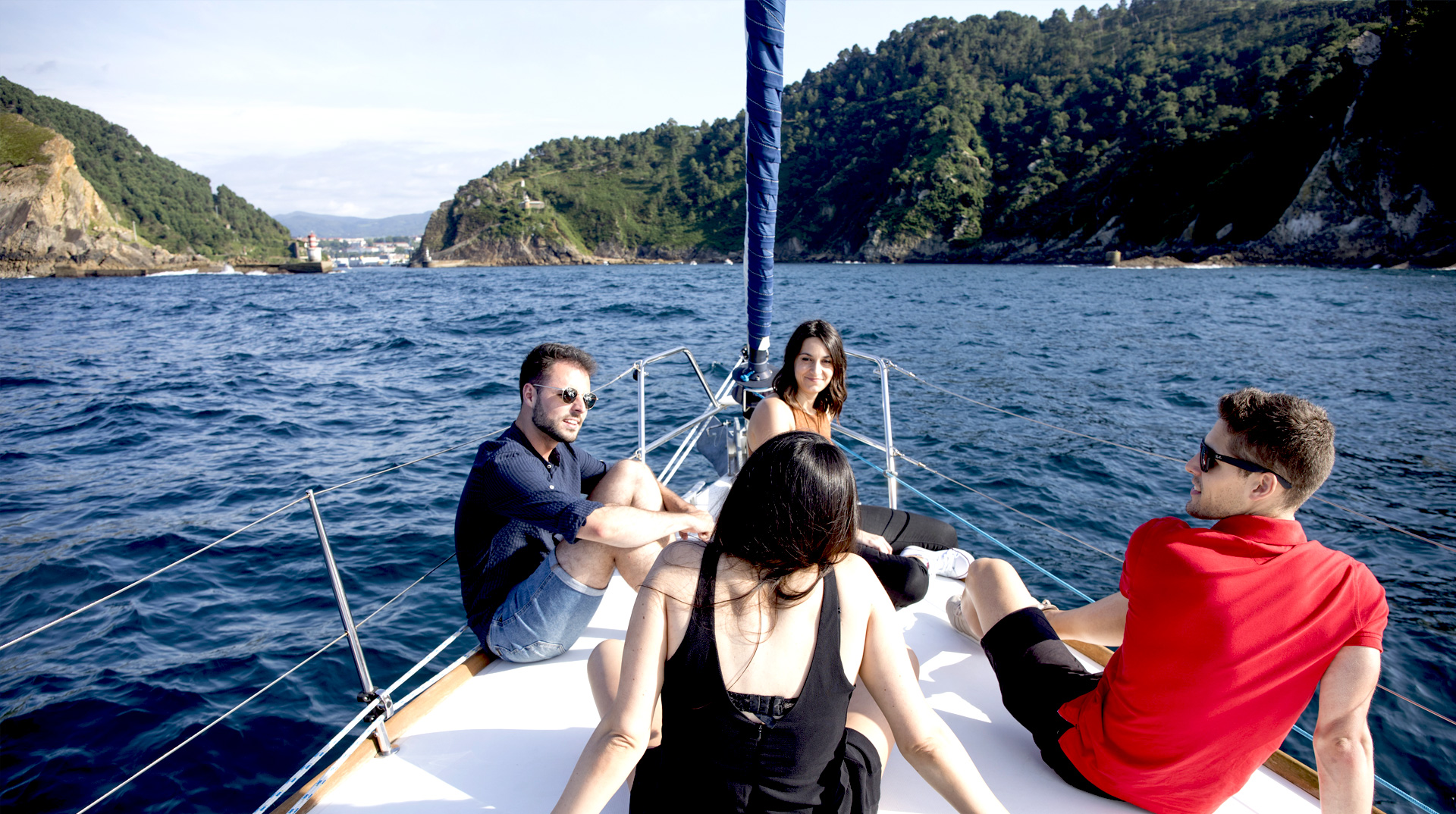 Our second recommendation is to visit the bay of Pasajes (Pasaia) by sailboat. It is the natural harbour par excellence of the Guipuzcoan coast, beyond the port of San Sebastian. Its orography protects it from the scourge of the sea and storms.

The bay of Pasajes is made up of three villages: Pasajes Antxo, Pasajes San Pedro, and Pasajes San Juan, which were later joined by the district of Trintxerpe due to the high demand for labour in the fishing sector. This bay is known for its rowing tradition and the rivalry between San Pedro and San Juan. 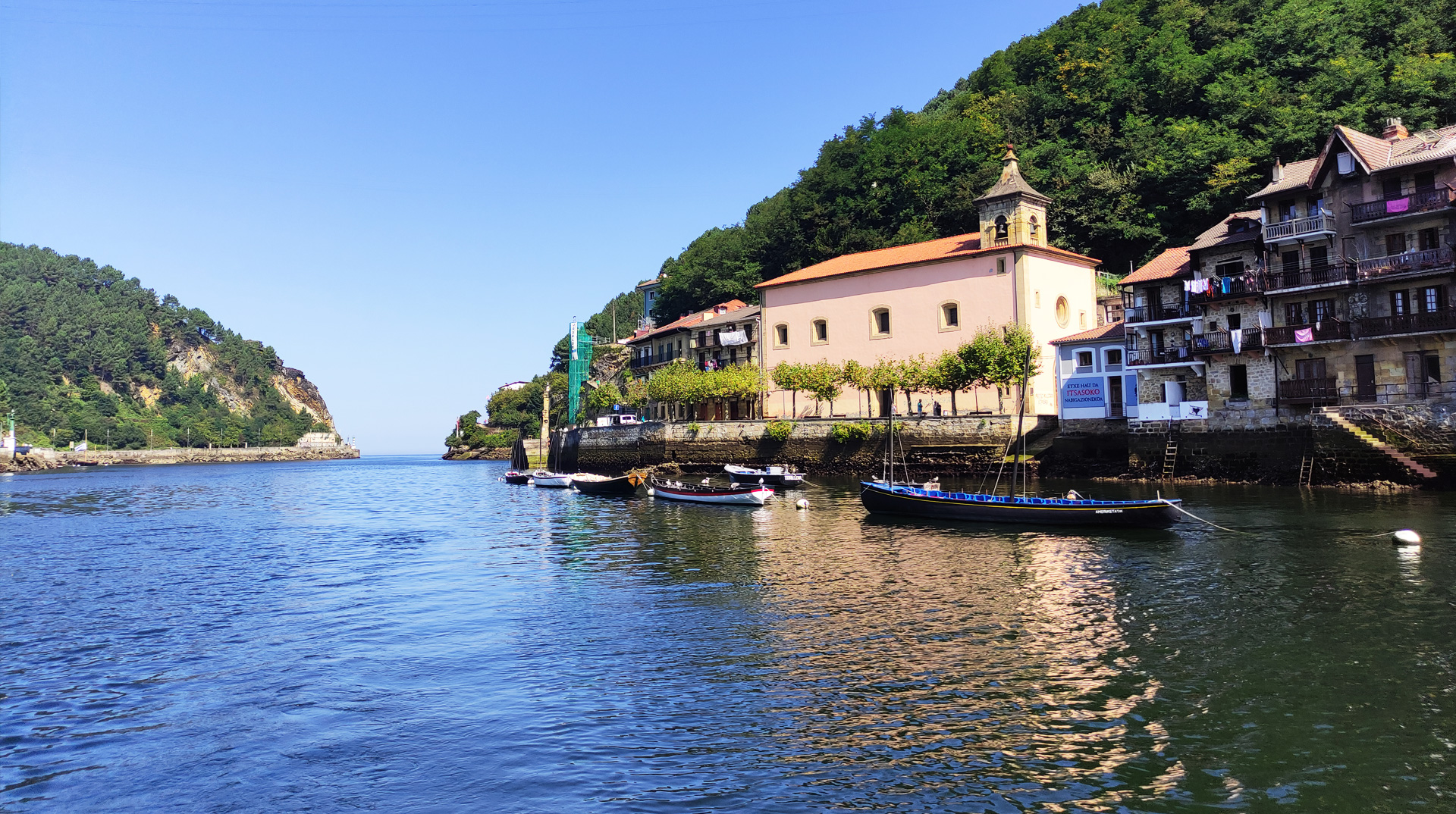 Contemplating the bay from the inside can be a magical activity that is even more magical when you visit it from the sea. Same place, but different perspective. Two cliffs open up a crack that gives access to the bay. A landscape that continues to surprise us every time we see it.

Getaria and the Flysch of Zumaia

The homeland of Txakoli and the birthplace of the navigator Juan Sebastián Elcano, the first to circumnavigate the world as captain of a crew that ended up massacred by the arduous journey. 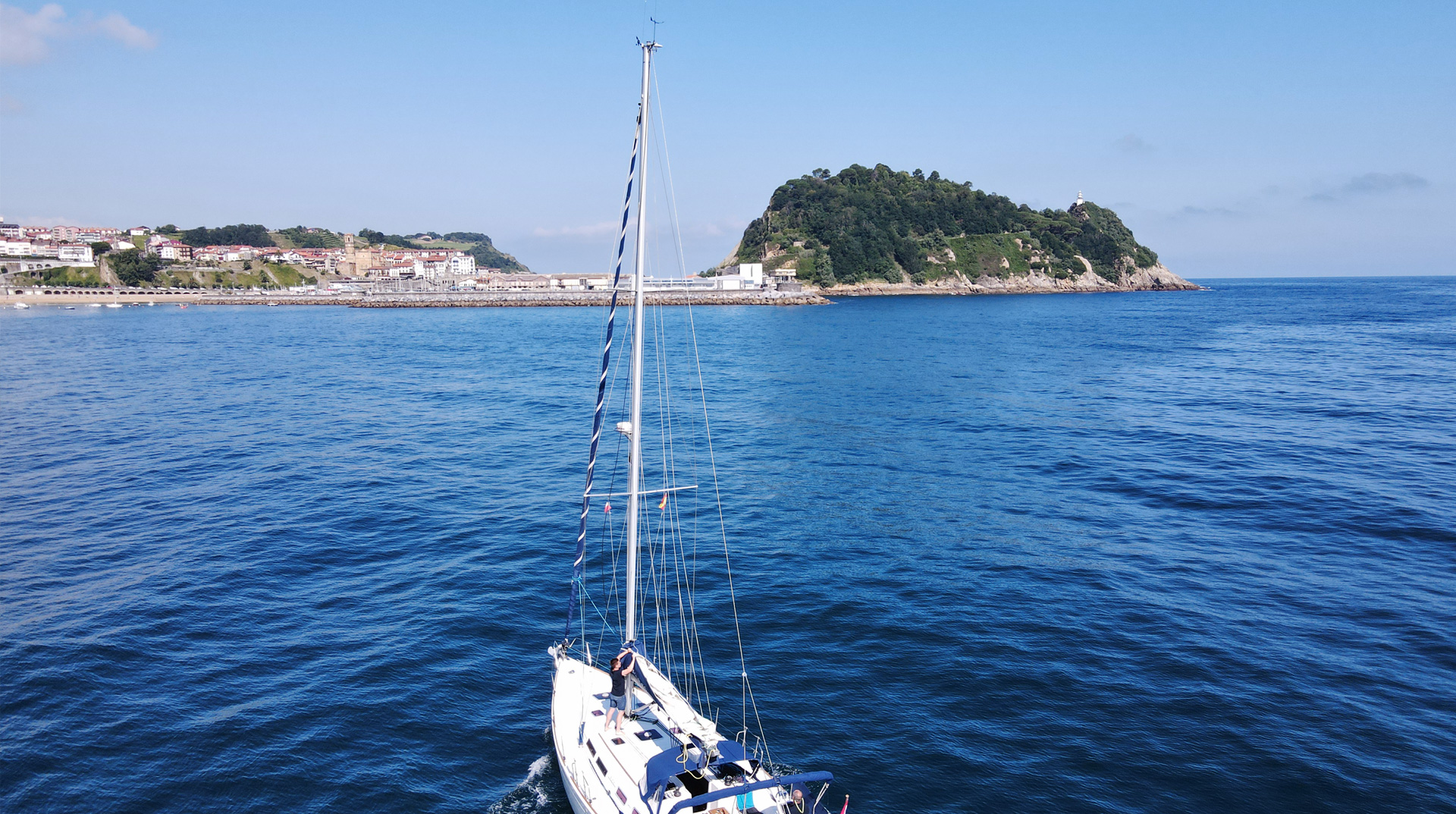 Getaria is a medieval walled town that has traditionally been a fishing village where, for years, whaling played a major role in its economy. To the north of the town, we find the mountain of San Antón, better known for its peculiar shape as the “Ratón de Getaria” (Getaria’s mouse).

Sailing west, we approach the Flysch, located between the towns of Zumaia, Deba, and Mutriku. A unique enclave recognised worldwide that uncovers chapters of history dating back more than 50 million years. It stretches along 13 km of spectacular cliffs that will leave you fascinated. This environment has been featured in several world-famous films and series.

Three crossings of Basque coastal villages that we recommend you discover on a sailing boat to enjoy with all five senses and which, accompanied by their gastronomy, will immerse you in the essence and authenticity of these places that you will not forget.